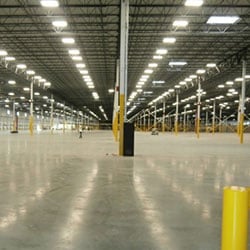 When Duke Realty, a national real estate development and management firm, was considering developing a 92-acre property in DuPont, Washington, they chose MacKay Sposito as their consultant. Our work began with an in-depth due diligence analysis of the property. After Duke purchased the site, they found a strong potential tenant with an immediate need: Amazon. Design for Phase 1 kicked off right away and included a 1.5 million square-foot distribution facility (1 million square foot building footprint) and nearly 1000 parking stalls. In order to successfully deliver, we worked within a shortened timeline to permit and occupy the space.

Some may say MacKay Sposito went beyond the call of duty when unforeseen challenges arose, but we know we were just doing what was needed for a successful project. For instance, one of the ponds had to be redesigned “on the fly” during construction when groundwater was unexpectedly discovered 5 feet higher than recorded by the geotechnical engineer. And in an effort to mitigate potential delays that threatened to push the project past its contractual deadline, Duke expanded MacKay Sposito’s project scope to include the preparation of as-builts for off-site street improvements. In fact, despite these challenges and a very ambitious schedule to begin with, MacKay Sposito’s efforts ensured that the project was completed on schedule.