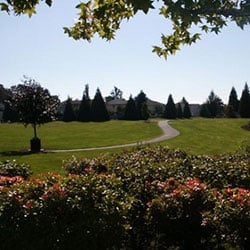 MacKay Sposito has been the civil engineering and land surveying consultant since Fisher’s Landing was initially conceived in the late 1980s, and evolved into serving as the lead land-use planning and civil engineering consultant. Fisher's Landing, encompassing over 2,100 acres, is home to nearby major employers such as Hewlett Packard, Sharp Microelectronics, WaterTech Semiconductor, Linear Technologies, Nautilus, and others.

MacKay Sposito designed and surveyed nearly all of the 2,100 acres within Fisher’s Landing while working for Newland and the wide variety of developers who purchased properties from Newland. These projects have included more than a half dozen major arterials, subdivisions encompassing over 3,300 lots ranging in size from 2,000 to 10,000
square feet, over 2,400 apartment and condominium units, assisted living and convalescent retirement communities, a golf course, ten parks, and commercial developments such as grocery stores, gas stations, and numerous office and medical buildings. Fisher’s Landing has been honored with several awards for subdivision, parks, and integrated water quality/storm management design.

Fisher’s Landing was the first large master planned community in Clark County, Washington. Concepts used in the conceptual design were innovative for its time and have been copied and duplicated by others throughout the Northwest. The 10 parks are all interconnected by trails and sidewalks that create a unique sense of community. Most of the landscaping is native Northwest species which allow for lower maintenance and bright, beautiful arrays of color throughout the seasons.