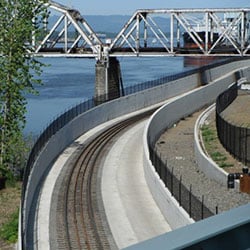 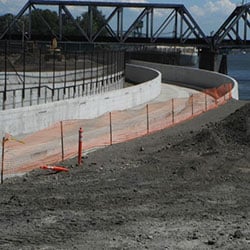 The Port of Vancouver (POV) has undertaken a large-scale rail access expansion effort called the West Vancouver Freight Access to meet the growing needs of its existing and potential tenants. MacKay Sposito completed the boundary and topographic survey of 4 linear miles (over 18 track miles) of Burlington Northern Sante Fe (BNSF) main line and 2 rail yards at POV to alleviate one of the worst points of rail congestion along the I-5 corridor. The rail topography included all salient rail related items such as switches, frog points, all compromise joints and rail weights. Our team, made up of 7 people, delivered this project on-time and on-budget.

The final product resulted in a 66-sheet topographic map prepared to the CAD standards of POV’s Rail Engineer, HDR Inc. The mapping included coordination with other team members performing wetland delineation, subsurface utility locates, geotechnical investigations, civil and structural engineering, hazardous material investigations, and coordination with BNSF for all work within 25’ of the rail. Our work also included a Geodetic Control Network of the Port with over 50 control points (including First Order Second Class, differential levels), bathymetric surveying of portions of the Columbia River and several ponds, an ALTA survey, a survey of BNSF right of way for POV purchase, and surveys of over 30 leaseholds subject to revision due to the rail right of way acquisition activities.